Nong (Maimon Mohd Top)
I am married to my loving husband for more than 40 years now. I am a mother to 3 beautiful children, until 13 years ago when I lost my youngest son. Since then my life is forever altered but yet unbroken....

“Your work is going to fill a large part of your life, and the only way to be truly satisfied is to do what you believe is great work...” - Steve Jobs

In conjunction with the Visit Malaysia Year 2020, several locations in downtown Seremban were decorated with murals. The street murals are located in Jalan Dato Bandar Tunggal, Jalan Yam Tuan, Jalan Tuanku Munawir up to Benteng Walk Seremban.
Unfortunately, because of the Covid19 pandemic and the MCO, we did not manage to visit these colourful sites. Recently, after completing our business at the lawyer's office we stopped along Jalan Yam Tuan and managed to capture some of the murals.
Next time we are in Seremban, we sure will find time to visit the other sites. 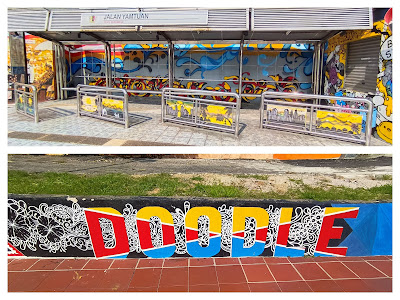 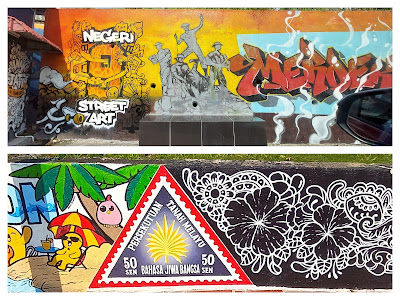 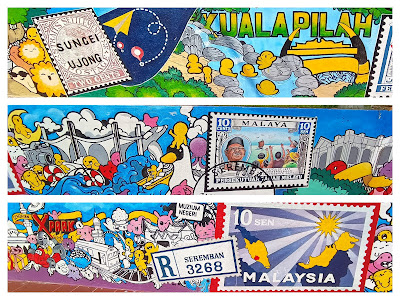 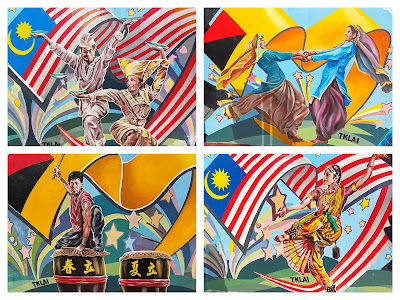 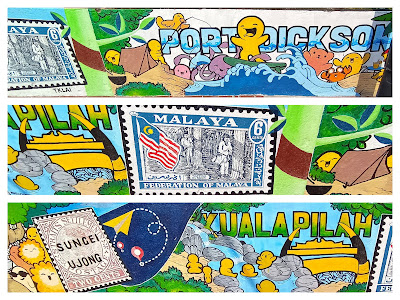 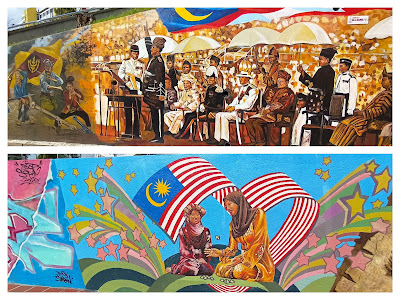 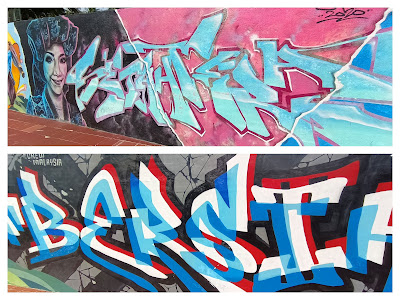 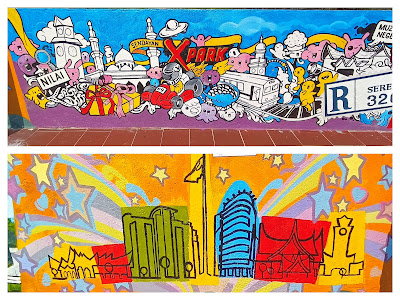 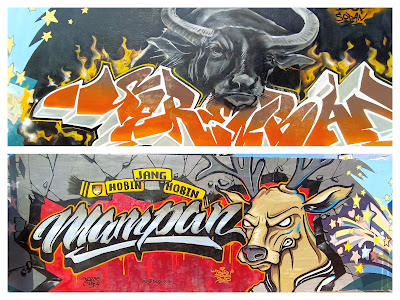 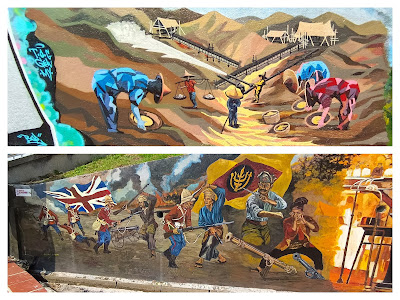 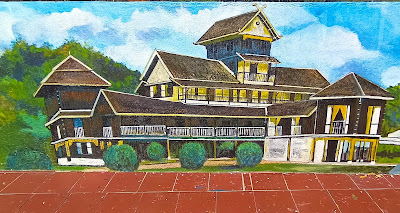 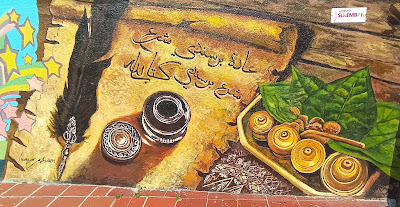 Selling off our Kebun in Pedas...

"Never measure your life by possessions. Measure it by the heart you touched, the smiles you created, and the love you shared..."

In mid 1995, a few BNM colleagues and I decided to purchase a piece of land in Pedas, Negeri Sembilan.
I took a loan from Bank Rakyat to partially finance the purchase. The rest came from whatever savings I had that time. The land was divided into about an acre each with varieties of fruit trees planted on the land. For a few years, we engaged someone to look after the land.

Busy with work commitments and travellings, we completely ignored that piece of land. A few times we tried to sell it off but could not find a genuine buyer. Until recently, someone came knocking at our door to ask whether the land was still for sale.
And finally, we managed to sell our Kebun in Pedas at a right price.
Posted by Nong (Maimon Mohd Top) at 15:30 No comments:

"Never say mean words out of anger. Your anger may pass but your mean words can scar a person for life. So use kind words or be silent..."

Masjid Ahmadiah or its original name Masjid Kampung Kepayang is one of the oldest mosques in Perak and Malaysia. The mosque was built and named after Toh Sedewa Domba bin Tok Tua. He was one of the Malay elders in this area and also the Orang Besar Enam Belas.

The glory of tin mining in Kampung Kepayang and Simpang Pulai at the end of the 19th century triggered the construction of this mosque by Toh Sedewa Domba to unite the people in Mukim Sungai Raya which consists of traditional villages namely Kampung Kepayang, Kampung Simpang Pulai, Kampung Sungai Ular, Kampung Tanjong and also Kampung Sindu. Most of the residents of the villagers are Malays.
The construction materials such as wood are believed to have been obtained from the surrounding area and transported using elephants. The construction of the mosque was fully completed in 1905.

A mimbar is also constructed at the same time. The mosque original building was rectangular in shape, surrounded by veranda. The main prayer hall has a mihrab and the three meters’ high mimbar was still preserved and intact. The unique 100-year-old mimbar is believed to have been made by a famous 19th century sculptor, the late Megat Ja’afar, a descendant of Megat Terawis, the first Orang Kaya Bendahara Perak during the reign of the first Sultan of Perak, Paduka Seri Sultan Muzaffar Shah I.

The mosque is made of wood and timber, quite similar to the Masjid Kampung Laut Mosque in Kota Bharu, Kelantan. Next to the mosque is the old surau of Kampung Kepayang.
A wooden surau was built in 1925, next to Masjid Ahmadiah. The structure of the old mushola is still sturdy and is used for Muslimat religious classes and other communal activities.
On March 1925, Masjid Ahmadiah Kampung Kepayang was gazetted in Perak Government Gazette. The name Masjid Ahmadiah is believed to be named after the name of the second Penghulu Sungai Raya, Toh Sedewa Ahmad bin Toh Sedewa Abdul Wahab.
Posted by Nong (Maimon Mohd Top) at 18:30 No comments:

"Your apology needs to be as loud as your disrespect was..."
GPS: 4.528835, 101.103507
04°31′43.81″N 101°06′12.62″E
Masjid Kg Teluk Memali is considered one of the oldest mosques in the Central Perak district. The mosque is now known as Masjid Teluk Memali Seri Bougainvillea, holds 1,001 stories especially about Kampung Bandar Baru which was once the Bandar Di Raja Perak.
The mosque was built since 1910 and was abandoned after Sungai Perak’s water rose and the villagers resettled to higher ground. Abandoned for more than 20 years, the structure of the mosque remains intact. The 108-year -old mosque was relocated to a new location at Taman Seri Bougainvillea in Bandar Seri Botani. Its Islamic architecture and carved motifs of Sumatran, Dutch and British and West Asia influences remained intact even after the mosque was relocated. The restoration works were carried out by expert architects, in collaboration with Ungku Omar Polytechnic and the mosque committee.
The architecture of the mosque is in the original Malay form with most of the structures use cengal and tualang wood. Masjid Kampung Teluk Memali may be related to the royal family, as Kampung Bandar Baru was once a Royal City before it moved to Kuala Kangsar.
The tomb of the 19th Sultan of Perak, the late Sultan Abdul Malik Mansur Shah and the tomb of the British Resident, JWW Birch, are located near the original site of the mosque.
Posted by Nong (Maimon Mohd Top) at 17:47 No comments:

"Words have a magical power. They can either bring the greatest happiness or the deepest despair..." - Sigmund Freud

GPS: 4.76417, 100.95085
04°45′51.01″N 100°57′03.06″E
Masjid Ubudiah, also known as Masjid Iskandariah or the Royal Mosque is considered as one of the most beautiful mosques in Malaysia. The magnificent golden dome and minaret of the mosque are proof of the beauty of Islamic architecture. The design of the mosque is influenced by Indo-saracenic or Islamic-Indian architecture. It was designed by AB Hubback, a government architect at the time.
The mosque is octagonal and has a central golden dome, and four minarets as well as turrets topped with smaller golden domes. Italian marble was used to add bands of darker colour to the white building. The walls and floor of the mosque are made of red and white marble from Italy. The design of the whole mosque is very unique and neat. The prayer Hall is quite spacious.
Masjid Ubudiah is a symbol of Malay Islamic art. Its construction is a source of inspiration for lovers of traditional Malay architecture. The design has made Masjid Ubudiah as one of the heritage buildings with high quality architectural value. Before the Perak State Mosque was built in 1968, Masjid Ubudiah used to be the State Mosque.
The Makam Al-Ghufran or Perak Royal Mausoleum is located near the mosque.

The last time we were here was during our Kembara Ramadhan in 2019. We had the opportunity to have iftar and performed our solat sunat tarawih here.
Posted by Nong (Maimon Mohd Top) at 15:58 No comments: